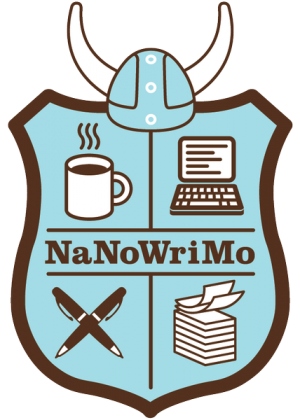 For those of you who don’t hang out in the same shadowy corners of the internet as I do, that’s National Novel Writing Month, although it would be more appropriately titled International Novel Writing Month, since people from all over the world take part. The idea is to write a novel in the space of a month: specifically, to write 50,000 words in the month of November. There are no other rules: just that you have to write 50,000 words worth of story between November 1 and November 30th.

I’ve done NaNoWriMo once before, in 2006. I spent every morning before work diligently typing away, and had one crazy weekend where I wrote 20,000 words over the space of two days, and ended up finishing around November 20th. The finished novel, tentatively titled “Reality”, then sat on my computer for years. Every so often I’d open up the Word file and cringe at how awful it was, have a go at editing a chapter or two into something resembling a real novel, and then give up again, but mostly it just sat around being ignored. I kept thinking that I really should do something with it, because it was a really really awesome idea – zombies in the Big Brother house! – and then Charlie Brooker’s Dead Set happened, and I finally acknowledged to myself that I never would work Reality up into a publishable novel and it would be forever consigned to the dusty recesses of my hard drive.

So why am I putting myself through this again?

I’m not sure I’ve really got a good answer for that. Every time NaNoWriMo rolls around, I think about taking part, but usually life gets in the way. This year, I knew I had enough spare time to do it justice, and I had an idea for a novel that’s been hanging around since about 2005, and so on October 29th, I decided to throw my hat in the ring and just do it.

That’s what NaNoWriMo is about, really: just doing it. It’s about the joy of creation. It’s about turning off the little voice in your head that says there’s no point in bothering, that you’ve got nothing to offer the novel-reading world, that there are a million other things you could be doing instead. It’s about turning off your inner editor, who says that that last sentence could have been expressed more concisely, or more evocatively, or just, well, better. There’s no time to go back and fine-tune every word. There’s only the mad panic and pain in your wrists caused by typing typing typing late into the night, and the terrifying knowledge that there are people out there who wrote 10,000 words on November 1st and are now coasting gently to the finish line while you’re still trying to catch up with the words you should have written three days ago.

When you write for a living, it’s easy to forget that writing can be fun. NaNoWriMo, despite the terror of such a short deadline, helps remind me that writing – especially the kind of writing where you’re just pulling random things out of your head and setting them down on paper – actually feels kind of awesome.

Of course, it’s easy for me to say that now, a comfortable 23 days from the end of November and 17,000 words into my story. Remind me of this blog post when I’m pulling my hair out on November 29th with another 15,000 words to go.

This site uses Akismet to reduce spam. Learn how your comment data is processed.